Less More
11 months 2 weeks ago - 11 months 2 weeks ago #4587 by Simomax
Source for Caesium-137 Cs137 was created by Simomax
I thought I would share as I have found a relatively inexpensive source for a Cs137 check source. It is in the form of a 'new old stock' Raytheon CK1097-15 spark gap from ebay.co.uk.
It isn't very active though. I bought it to use as a calibration source for my gamma spectrometer project I'm on with. I tested using a LND712 tube and got about 55 CPM tops (background was ~17 CPM) and had to place the spark gap right up to the end window of the LND712. Whilst not very active it should work well for calibration purposes.

It's hard to photo the printing on the spark gap and had to do so at an angle. I'm assuming the 86-15 part is a date code (week 15 1986) making it just over 30 years old and as the half life is Cs137 is about 30 years it would be literally half as active as when new. It looks like the electrodes were coated with Cs137 and from the pictures it looks like it has either decayed or there is corrosion/oxidization. An interesting find nonetheless. 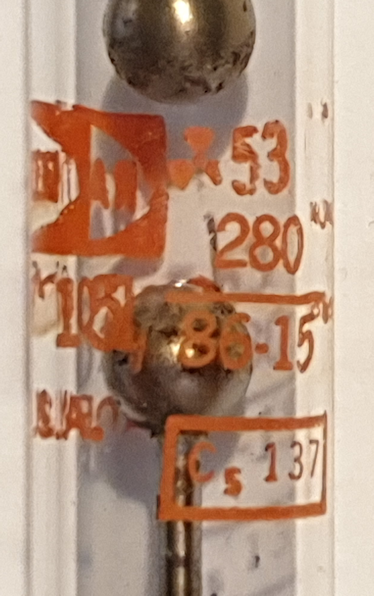 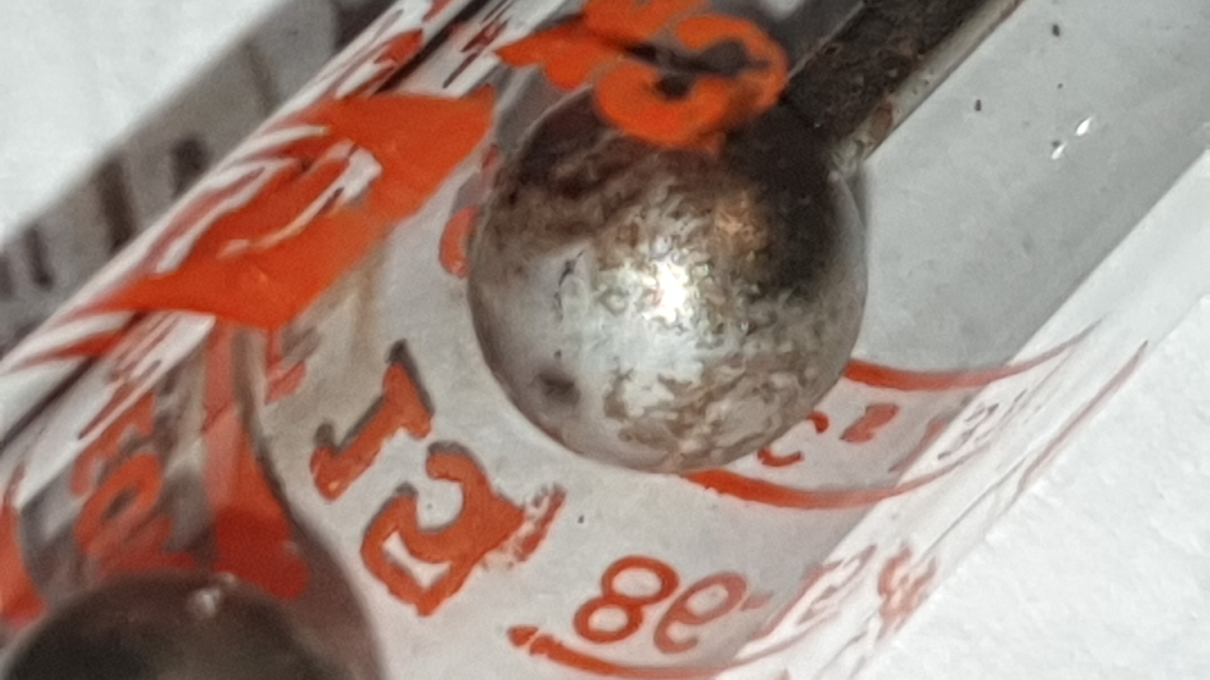 Would it be possible to have a separate board on this forum for radioactive sources and samples? Say amongst the 'Geiger counter discussions' section? I often see bits and pieces here and there for sale so would be a good place to let others know and also talk about the different sources/compare readings etc etc.
Dreamtechnologies Monitoring Station www.dreamtechnologies.co.uk | www.facebook.com/DreamtechnologiesUK

Hmm, that didn't work either. Go to ebay.co.uk and search for 254215324479. That should bring it up.
Dreamtechnologies Monitoring Station www.dreamtechnologies.co.uk | www.facebook.com/DreamtechnologiesUK
Last edit: 11 months 2 weeks ago by Simomax.

Wow, never seen one of them! What were they used for? High overvoltage protection?
If that part was meant to be sealed it doesn't look like it anymore? Slow ingress of air and moisure over 30 years?

A separate board for radioactive sources and samples? Yes!

Less More
11 months 2 weeks ago #4591 by Simomax
Replied by Simomax on topic Source for Caesium-173 Cs137
FSM19, I think it was that video I watched that gave me the idea to have a look about on the internet for something similar, and I found the very same thing!

mw0uzo, It's possible the seal has broken down over time, although 30 years isn't really long for that to happen, especially a Raytheon product. Raytheon are right up there with the best of the electronic component manufacturers supplying to the aerospace industry, or at least were. I have a collection of violet ray wands and electrodes and whilst some of them have pulled air in over time some are nearly 100 years old and still working strong. Again with some geiger tubes from the 50's and 60's. Either way its the Caesium I want!

The new board is great to hear, thank you! I have quite a collection of samples and sources that I really want to test and do a bit of a write-up on. Some of them are quite hazardous though, not in radiation, but in toxicity so I'll have to set up a safe environment to do so. I'll only probably be doing it once as a couple are powders and are in tiny viles. There is soil from very near a uranium mine, Thoriated cotton (came from a mine in Wales I think), Uranium trioxide, Uranium dioxide (yellowcake), depleated Uranium. All of these are extremely hazardous if inhaled and I'd hate for them to get into the atmosphere so I'd need to take proper precautions as I want to photograph them, take a look under the microscope and check their counts with a mix of counters/tubes. I won't be doing that though until I have my gamma spectrometer up and running one way or another so I can analyze them under that. So I need to get my ducks lined up then do it all over a couple of days.

I would love to get my hands on samples of some of the more exotic radionuclides Strontium, Polonium, Plutonium etc. and maybe one day... maybe...

Less More
10 months 4 weeks ago #4734 by Alpha01
Replied by Alpha01 on topic Source for Caesium-173 Cs137
Hello,
This is my own Cs source I'm using to test my counters. The TG-162, manufactured by CP CLARE, came from a primary radar we scraped almost 20 years ago. It was used in the protection circuit of an E2V magnetron and is rated for 21kV. 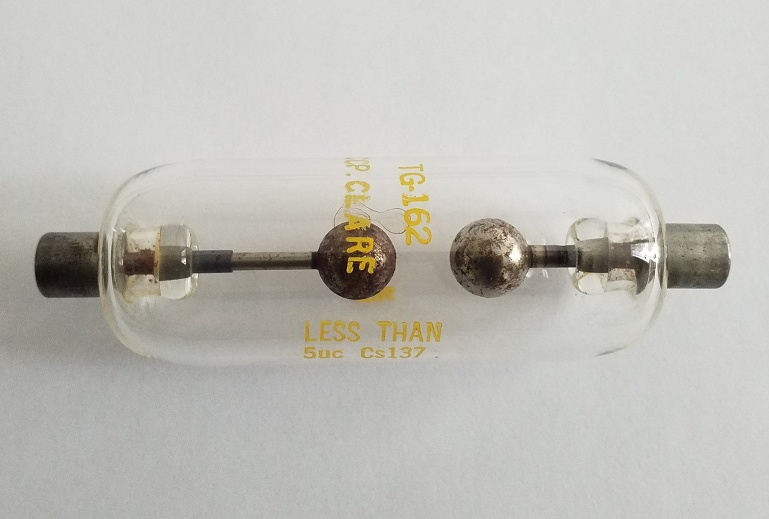 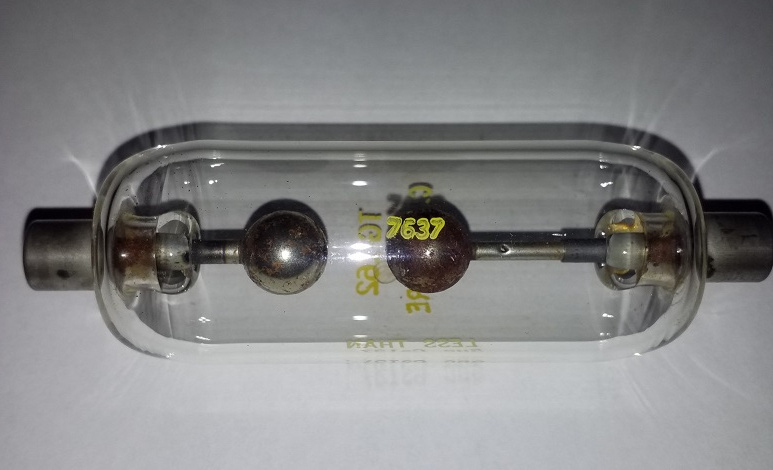 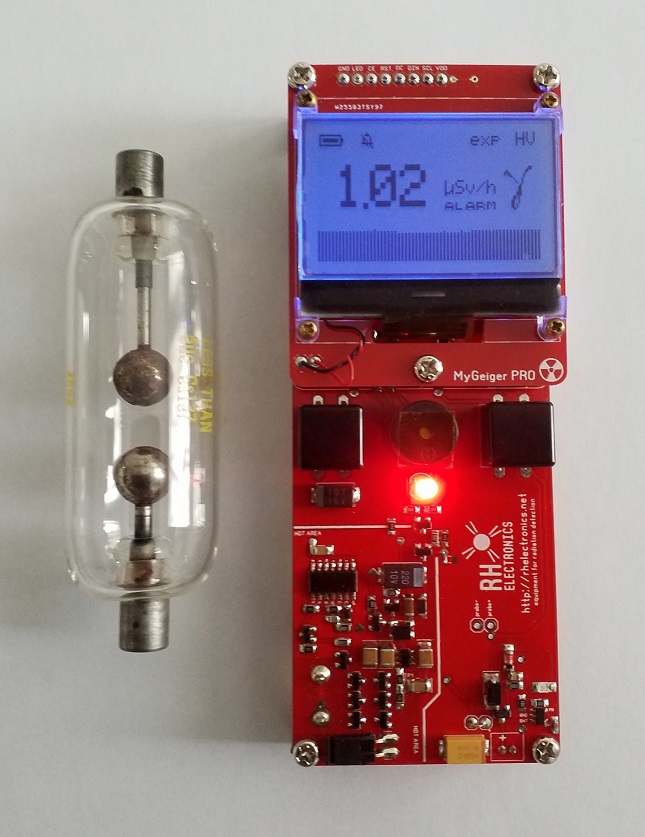 MyGeiger 3 Pro went crazy with it...